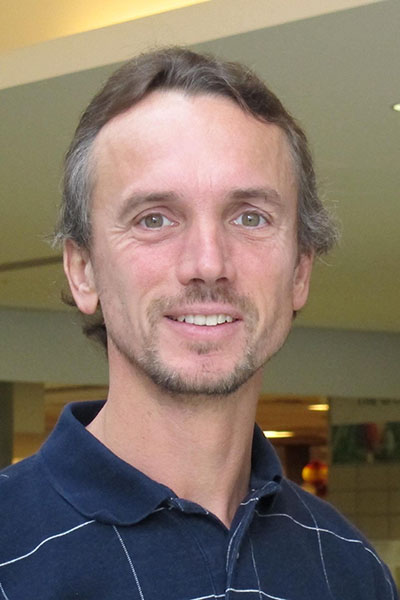 Environmental and resource economics, particularly the economics of water resources; factors that determine water use in the Okanagan and other regions; policy options to encourage ways of using water - and other resources - to more effectively serve the needs and wants of local communities and society at large.

It took me a while to sort out my academic interests, wandering through a variety of sciences – physics, mathematics, ecology and genetics – before settling down in UBC’s agriculture program. Two degrees in Agricultural Economics followed by an MBA kept me out of the real world long enough that academia seemed like the right path. I earned my Ph.D. from Queen’s University in 2002, concentrating in Environmental and Natural Resource Economics and Econometrics. I moved to the Okanagan campus of UBC from Acadia University in 2007, and have held a research chair in Water Resources and Environmental Sustainability since January 2012. I spent my youth on a dairy farm in Chilliwack, with those agricultural roots continuing to influence my research and personal interests. I like to literally get my hands dirty, and my students, colleagues and friends have enjoyed(?) some of the surplus I grow as one of my hobbies. The rest of those hobbies typically involve trying to get an endorphin high in the outdoors – hiking, running, cycling, ski touring, mountaineering, … Fishing, bird watching, and golf don’t (yet) seem to do it for me.

I was born in Chilliwack, British Columbia, and spent the first 20 years of my life there. My parents operated a dairy farm, and until I left for university, my summers and many other hours during the year were spent working on the farm. My first two degrees are in agricultural economics, in part because for many years I was considering taking over the family farm. While that didn’t happen, I still have a soft spot for the farming life.

After three years studying at what was then Fraser Valley College, while living at home and working on the farm, I moved to Vancouver to continue my studies at UBC. My years at FVC and initially at UBC were rather unfocussed, enabling me to pick up the equivalent of third year math and biology, second year physics and chemistry, and a smattering of courses from political science through to Latin. I eventually settled in the Faculty of Agriculture, where I completed a degree in agricultural economics.

With a University Graduate Fellowship and a longing to be close to the woman that I would later marry, I began a masters in agricultural economics in 1996. After completing this degree in 1998, I then moved to SFU where my then wife was studying her Ph.D., and completed an MBA with a concentration in finance. With our first child on the way, we postponed our plans to take a year and climb all of the Cascade volcanoes, and moved to Kingston, Ontario where I would complete my Ph.D.

During my doctoral studies I focused on environmental and natural resource economics, and econometrics. My initial research interest lay with sustainability and limits to growth. However, an opportunity to study the sustainability of irrigated agriculture in India presented itself, and I jumped at it. This lead to a fascinating trip to India and a frustrating exercise in trying to do effective multidisciplinary work. Most of the multidisciplinary character of the work was abandoned in my dissertation, but the experience did help confirm to me that working across disciplines is necessary, although it must be done carefully if good results are to be generated.

After four years at Queen’s, with an incomplete dissertation, and now two children, I needed a job. There was a short term teaching position available at Acadia University in Nova Scotia, which subsequently turned into a tenure track and then tenured position. However, for personal and professional reasons, moving back west was a longing that was ever present, and when UBC opened the Okanagan campus, I began applying. Being third time lucky, I was given a position in 2006, which I assumed in 2007. Unfortunately, marriages don’t always last, and mine didn’t survive this transition. As such, I do continue to have a very strong connection to that place where my children live, which is presently in Wolfville, Nova Scotia.

Seeking to understand how people and institutions make decisions in complex social-ecological systems broadly captures my research interests. Within the Okanagan, we live with the highest concentration of rare and endangered species in Canada, one of Canada’s highest rates of per capita water use, in a watershed with one of Canada’s lowest per capita sustainable water supplies, with among the highest rates of population growth rates in our country. I am interested in finding ways to protect and enhance the special things about this place that make it great to live here. That starts with understanding what drives individual and collective choices and continues by investigating how to align those incentives with long term sustainability goals.

Janmaat, J. Drought Impacts, Irrigator Attitudes, and the Potential for Water Trading in the Okanagan.

Janmaat, J. Fishing in a Shallow Lake: Exploring a Classic Fishery Model in a Habitat with Shallow Lake Dynamics.

Janmaat, J. and vanBlarcom, B. The Impact of All Terrain Vehicle Access on the Demand for a Proposed Trail.

Janmaat, J. and Ruijs, A. Investing in Arms to Secure Water.