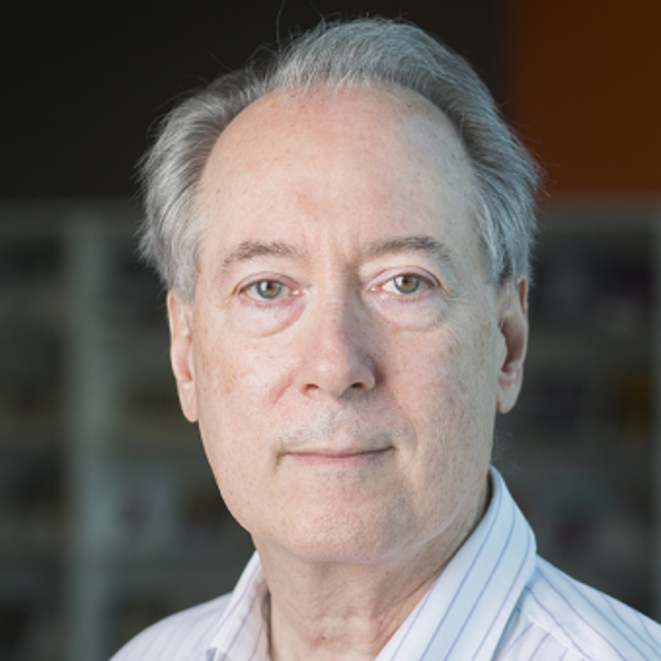 Gillmor was a business and technology columnist at Silicon Valley’s daily newspaper, the San Jose Mercury News, from 1994 to 2005. He also wrote a blog for SiliconValley.com, one of the first by a journalist for a traditional media company. Prior to that, he was a journalist at a number of other newspapers across the United States.

Gillmor has freelanced for many publications, including the New York Times, the Boston Globe, and the Economist. He’s the author of the books, Mediactive and We The Media: Grassroots Journalism, by the People, for the People.

You’re a co-founder of the News Co/Lab at Arizona State University. What’s the goal of the Co/Lab?

We know we need to improve the supply side of information, with better journalism and so on. But we also need to improve the demand side. The motivation behind the Co/Lab is that we have to upgrade ourselves, the citizenry, making ourselves into better users of information. We all need to be better at navigating the increasingly complex media ecosystem with media literacy skills. And we need to be able to improve media literacy at scale. That’s what the Co/Lab is trying to do.

How does the News Co/Lab work?

Three institutions in our society can help us achieve that scale: education, media, and technology. We work with all three.

In the education arena, we don’t focus on K to 12 because other people are doing a fantastic job there and we don’t want to replicate other people’s good work. Instead, we aim to work where we see a gap. In one recent and ongoing project, we launched an open online course that’s designed to help adults become better at media literacy. Data shows that the demographic sharing the most misinformation is older people. So we focused partly on enrolling seniors, and many seniors have taken the course.

When we work with journalists, who create one prominent kind of media, our approach is to have them tweak what they’re already doing to become much more transparent. Journalists can let people know who they are, what they do, how they do it, why they do it. They should be fixing mistakes in a public way, and limiting the damage they can do. If people understand better the process of news creation and distribution, that can help them appreciate (among other things) how mistakes and misrepresentations can slip in. Most people often don’t even understand the difference between straight news and commentary. Journalists need to make that distinction clear to people.

We also think media organizations should have conversations and collaborations with the communities they serve. Engagement is related to transparency, though not the same thing. In one project, media consumers asked questions, which journalists and a public library answered — and explained what research they did, who their sources were, and so on. We believe the combination of journalistic transparency and engagement is part of a process that helps communities become more media literate.

Tech platforms could do more in a week to help with media literacy than the rest of us combined could do in a year. They’re not doing nothing — the Facebook Journalism Project funded the online course — but we’d urge them to do much more. For example, researchers need much more access to fully understand how people get and use information, including sharing. Ultimately, we hope technology platforms will make media literacy part of their products and modify those products on the demand side. If they don’t want to be the editors of the internet, and they insist they do not want that, they need to help the rest of us — as individuals and members of communities — be our own internet editors.

What can an ordinary person do to become more media literate?

First, be skeptical of absolutely everything. Even the best journalists at the most reliable news organizations can and do make mistakes.

Second, don’t be equally skeptical of everything. An anonymous comment on a random blog or a tabloid at the grocery store checkout deserves vastly more skepticism than the New York Times or the Wall Street Journal.

Third, do research and ask questions. Read more than one source to get a fuller picture. And the closer the topic is to what you do and where you live, the easier it can be to ask your own questions.

Fourth, go outside your information comfort zone. Get out of your echo chamber and actively seek out information from sources that will challenge your assumptions, and help you learn about people who are not like you.

Fifth, understand how the media works. Understand how we can be manipulated by the media, how media creators can push our emotional buttons.

There are principles for media creators as well: journalistic principles including transparency. And in the place where consumption meets creation — sharing — we all need to be much more careful to think before we share.

Along with a lack of media literacy, many people seem to have little trust in expertise. Why do you think that is?

Trust has been eroded in part because a few experts have betrayed their positions. They’re a small minority, but it has happened. Think about scientists hired by the tobacco industry and the fossil fuel industry to mislead us about things that were massively dangerous. Think about pharmaceutical studies that hide bad news and tell us only the good news.

Scientists have contributed to the problem by not being very good at explaining what they do. The journalist’s role in this is to help get the best information out there, in a way people can understand, and without over-simplifying. And while there are some brilliant science reporters, journalists in general don’t understand math or science well enough.

We need to help people understand that science is a complicated and nuanced process. One way to do that is to have nuanced journalism.

I think the fact that anybody can publish — on social media, on their own blog, with their own email newsletter — is fundamentally a very good thing, but in this context it does make media literacy (and science literacy) even more important.

Lack of trust in expertise also seems to be a factor that contributes to the flourishing of conspiracy theories. What other factors do you think play a role?

One reason that conspiracy theories can take root is that there are occasional actual conspiracies. Many institutions in modern life have done things, or had powerful people inside them do things, that are corrupt and outrageous and have violated trust. For example, the pharmaceutical industry — which is helping to save the world right now — has done some pretty terrible things along the way.

I believe that most people are good, and that most institutions are trying to do the right thing. I wonder if journalists have inadvertently contributed to conspiracy theories simply by not putting the brilliant investigative work they do into context. Journalists haven’t made it clear enough that these bad actors are often unusual exceptions and not everyone in that arena acts that way. Conspiracy theories can get traction from a grain of truth that gets expanded into something malign and widespread. I’d like to see research investigate that possibility.

You’ve said journalists failed in their coverage of the Trump presidency. In what ways?

Journalism as a whole failed dramatically in the run-up to the Trump presidency and during it. Despite some examples of staggeringly good work along the way, it’s hard to know where to start on the failures. No media organization did more to elect Donald Trump than CNN. They promoted that candidacy relentlessly and cynically, refusing to understand how dangerous it was going to be.

During Trump’s presidency, for the longest time, journalists engaged in verbal contortions to avoid using the word ‘lie’ about someone who lied relentlessly about almost everything.

The idea of there being two sides to every issue has always been wrong, the laziest kind of journalism. And this persistent journalistic norm of ‘balance’ was used brilliantly by Trump and others to get journalists to publish and broadcast lies. There aren’t two sides to every issue, when one of them is a lie. This isn’t a new problem in journalism, and the craft may be getting better at avoiding false balance even though we still see a lot of it.

Although journalists did a decent job of picking up on instances of corruption in the administration, news organizations never put it all together. Nobody assembled all the pieces and put them into context to show the full picture of this massively corrupt government. We still don’t really know how wide and deep the corruption went.

Join us for a diverse expert panel on how we can combat misinformation while preserving free speech. Dan Gillmor speaks on March 4 from 3:15 pm to 4:00 p.m.