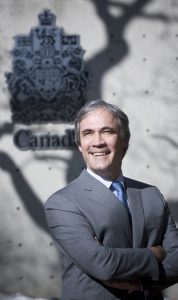 After graduating from the University of Manitoba with a BComm (Hons), David Chatterson worked for a bank and framed houses before accepting an offer to work for the Federal Government in Ottawa. He spent the next three decades working on anti-dumping and countervail investigations, trade-policy research and trade-dispute resolution, and international trade negotiations. He worked in both Ottawa and abroad, with two postings to Tokyo and one to the OECD in Paris.

During his career Chatterson worked mostly on public-policy analysis, development and implementation. He also worked closely with Ministers and their political staff, and was motivated by the desire to obtain positive outcomes for Canada and Canadians.

Subsequently, he moved to Kelowna where he has been busy building a house, touring the region by motorcycle and kayak, writing occasional op-eds and teaching a few courses at UBC Okanagan (UBCO).

Q: Did you enjoy your time at University?

David Chatterson: I enjoyed most of my classes, and especially the discussions I had with the students I met from other faculties, as this greatly widened my exposure to ideas and ways of thinking that were new to me.

And while I enjoyed university, I enjoyed working even more. I have been very fortunate to have had no shortage of opportunities to work on very interesting and complex issues, to work at the interface between policy and politics, to work with a great number of people from around the world who were and are very much at the top of their fields, and to have been able to contribute, in a small way, to making Canada and the world just a little bit better.

Q: What was your motivation to become involved with UBCO?

David Chatterson: My first involvement occurred when I was asked to help develop a one-day seminar on the implications of a nuclear North Korea, a seminar made possible by the financial support of Roger Gale.

I was then asked if I could develop and deliver a course on trade policy. In deciding whether I wanted to teach the course, I remembered that the academics with whom I worked during my career appreciated having had access to the real-world practical experience that people like me could provide, and I thought students might benefit from the same kind of access. I was also aware that many of my former colleagues were teaching in universities in Toronto, Ottawa and Montreal and I felt students at UBCO should also have access to this kind of experience. Having now taught a course on international trade and a course on international relations, I can say that students have reacted with enthusiasm.

I am very grateful for the opportunities I had during my career. Teaching at UBCO is a way for me to give something back. A degree in philosophy, political science and economics provides a solid foundation for anyone contemplating a career in public service. At the same time, an experienced policy practitioner can help students learn such things as how to develop beneficial policies while navigating political shoals; how decisions get made at senior levels; how negotiations are conducted; and how to present convincing arguments.

Apart from the satisfaction that comes from making a contribution, I have very much enjoyed spending time with the students and their questioning minds, fresh perspectives and desire for positive change. All in all, I have found it to be mutually beneficial and an intellectually stimulating environment.

Q: What do you see as the future of UBCO?

David Chatterson: I believe universities need to stay relevant by linking the education of our future leaders with society’s rapidly evolving employment and development needs. I would like to see UBCO become even more involved with the community and to play a larger role in its economic, social and cultural development. It certainly has the potential to do so.

David Chatterson, “We should focus on changing Saudi behaviour – not on punishment,” The Globe and Mail, October 25, 2018