By Lindsay Samantha Howe on February 2, 2021 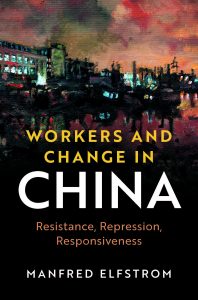 Manfred Elfstrom, assistant professor of political science in the Department of Economics, Philosophy and Political Science, has written a new book, titled Workers and Change in China: Resistance, Repression, Responsiveness.

In the book, which is published by Cambridge University Press, Elfstrom asks why the Chinese party-state is addressing a number of worker grievances while at the same time coming down increasingly hard on labour rights activists. Elfstrom investigates both the causes and consequences of protest through extensive fieldwork and statistical analysis, while exploring the daily evolution of autocratic rule, highlighting how pressure from grassroots organizing can lead to political change, even in the grimmest of circumstances.